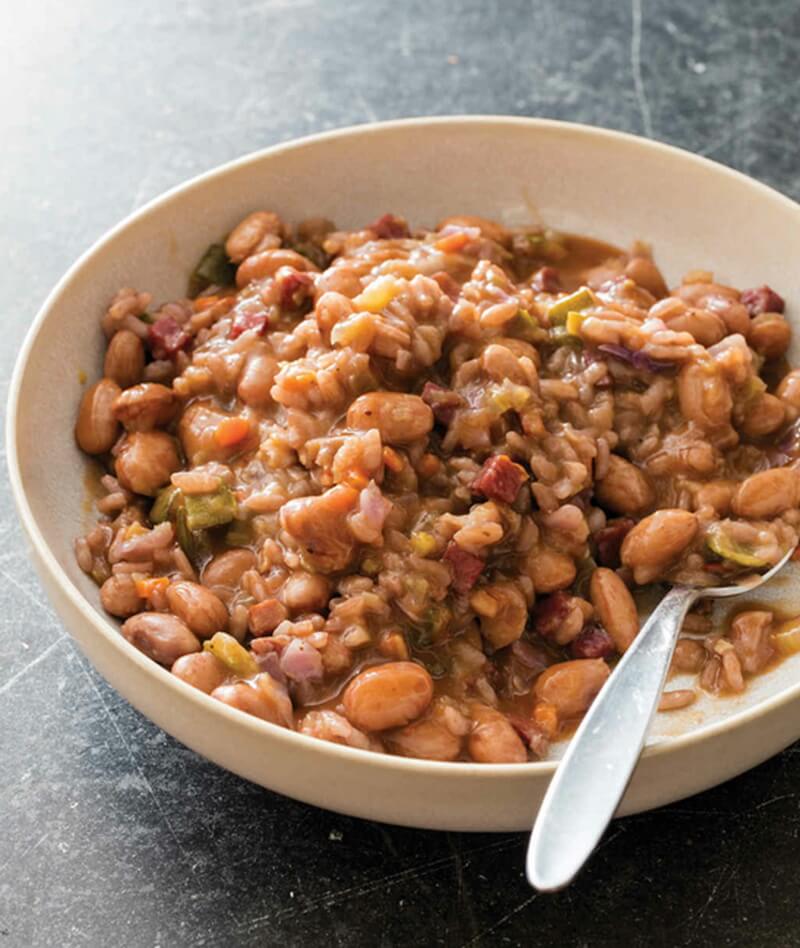 This hearty Italian risotto gets meaty, savory flavor from a small amount of browned pancetta and salami.

Paniscia
SERVES 8
WHY THIS RECIPE WORKS The Italian region of Piedmont is known for its carnaroli rice, its thick-skinned, creamy cranberry beans, its cured meats (salumi ), and its robust wines (Barolo, Barbaresco, and Barbera, to name a few). It’s no wonder that one of the most iconic dishes of the region is a risotto that unites these four elements. In the city of Novara, paniscia is made by creating a hearty, brothy vegetable and bean soup and incorporating it into a risotto flavored with salam d’la duja , a lard-cured salami. We started with the soup. While traditional recipes vary when it comes to vegetable additions, our tasters liked a combination of leek, carrot, and celery as well as zucchini and red cabbage, which added a satisfying complexity to the dish and served as a perfect foil for the meatier elements. Once our soup was done and the beans were fully tender, we strained out the ultraflavorful broth to make our risotto. Because salam d’la duja is difficult to find outside of Italy, we used a mild, Italian-style salami in its place. The traditional addition of red wine gave the dish a rich backbone, and stirring in the broth in small amounts gave the rice an amazingly velvety consistency. At the end of cooking, we incorporated the vegetables and a splash of red wine vinegar to offset the deep, rich flavors. This dish is traditionally prepared using carnaroli rice, but you can substitute Arborio rice. A medium-bodied dry red wine such as Barbera works well here. For more information on soaking beans, see here .

1. FOR THE BEANS AND BROTH Dissolve 1½ tablespoons salt in 2 quarts cold water in large container. Add beans and soak at room temperature for at least 8 hours or up to 24 hours. Drain and rinse well.
2. Heat oil in large saucepan over medium-high heat until shimmering. Add pancetta and cook, stirring occasionally, until beginning to brown, 3 to 5 minutes. Stir in leek, carrot, celery, zucchini, and cabbage and cook until softened and lightly browned, 5 to 7 minutes. Stir in drained beans, rosemary, and 8 cups water and bring to boil. Reduce heat to medium-low, cover, and simmer, stirring occasionally, until beans are tender and liquid begins to thicken, 45 minutes to 1 hour. Strain bean-vegetable mixture through fine-mesh strainer into large bowl. Discard rosemary and transfer bean-vegetable mixture to separate bowl; set aside. Return broth to now-empty saucepan, cover, and keep warm over low heat.
3. FOR THE RISOTTO Heat 1 tablespoon oil in Dutch oven over medium heat until shimmering. Add onion, salami, and ½ teaspoon salt and cook until onion is softened, about 5 minutes. Add rice and cook, stirring frequently, until grain edges begin to turn translucent, about 3 minutes.
4. Stir in tomato paste and cook until fragrant, about 1 minute. Add wine and cook, stirring frequently, until fully absorbed, about 2 minutes. Stir in 2 cups warm broth, bring to simmer, and cook, stirring occasionally, until almost fully absorbed, about 5 minutes.
5. Continue to cook rice, stirring frequently and adding warm broth, 1 cup at a time, every few minutes as liquid is absorbed, until rice is creamy and cooked through but still somewhat firm in center, 14 to 16 minutes.
6. Off heat, stir in bean-vegetable mixture, cover, and let sit for 5 minutes. Adjust consistency with remaining warm broth as needed (you may have broth left over). Stir in remaining 1 tablespoon oil and vinegar and season with salt and pepper to taste. Serve. 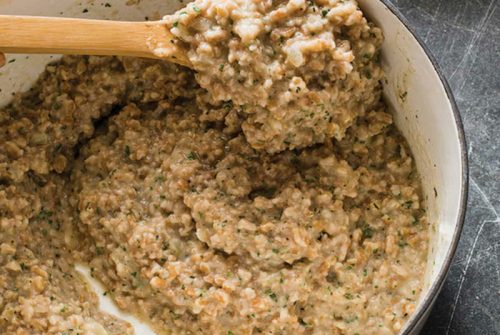 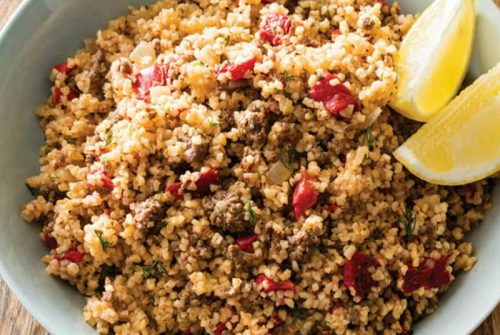 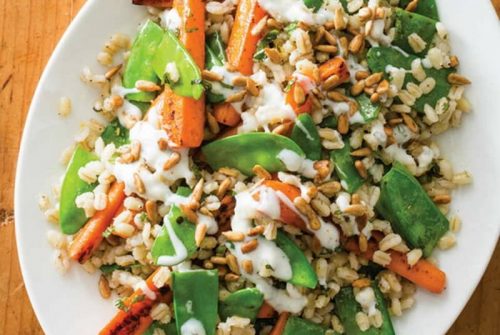