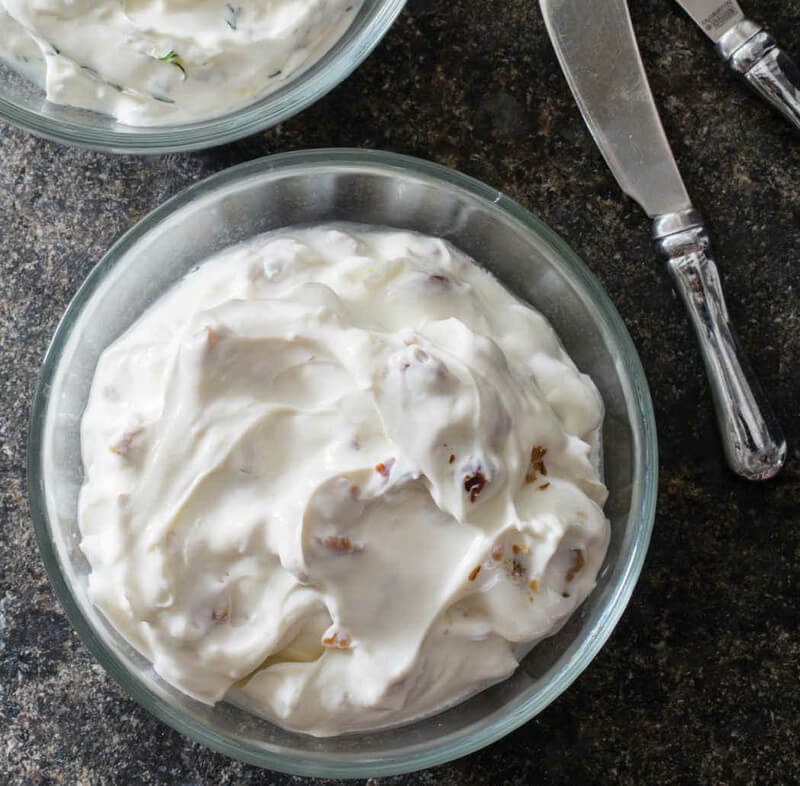 Yogurt Cheese
MAKES about 1 cup VEG
WHY THIS RECIPE WORKS Yogurt cheese, also called labneh , is not really a cheese at all; rather, it is yogurt that has been strained to remove its whey, giving it a thick, lush consistency and a rich, tangy flavor. Often eaten in the eastern Mediterranean, it can be used plain or mixed with a few simple flavorings to make a light, fresh dip or spread for bread or vegetables. Yogurt cheese couldn’t be easier to make at home, requiring only one ingredient and a couple of hours of hands-off time. To end up with about 1 cup of yogurt cheese, we started with 2 cups of traditional yogurt. A strainer lined with several coffee filters or a double layer of cheesecloth was ideal for allowing the whey to drain off. After about 10 hours, a full cup of whey had drained off, leaving us with velvety strained yogurt. Though the tangy yogurt cheese was a treat on its own, we also created a couple of flavorful variations: a bright combination of lemon zest and fresh dill and a sweeter variation made with chopped walnuts and honey. Both regular and low-fat yogurt will work well here; do not use nonfat yogurt. Avoid yogurts containing modified food starch, gelatin, or gums since they prevent the yogurt from draining.

2 cups plain yogurt
1. Line fine-mesh strainer with 3 basket-style coffee filters or double layer of cheesecloth. Set strainer over large measuring cup or bowl (there should be enough room for about 1 cup liquid to drain without touching strainer).
2. Spoon yogurt into strainer, cover tightly with plastic wrap, and refrigerate until yogurt has released about 1 cup liquid and has creamy, cream cheese–like texture, at least 10 hours or up to 2 days.
3. Transfer drained yogurt to clean container; discard liquid. Serve. (Yogurt can be refrigerated for up to 2 days.)

NOTES FROM THE TEST KITCHEN
All About Yogurt
Yogurt is integral to many a Mediterranean dish—from Greek tzatziki sauce to Turkish yogurt soups. The word yogurt comes from the Turkish word for “condense.” To make a basic yogurt, milk is heated and then cooled to just over 100 degrees before a bacteria culture is added. After 4 to 8 hours, the mixture thickens into yogurt. In the Mediterranean, yogurt is often made with sheep’s milk, which has a high fat content and makes for a rich, creamy yogurt. In the United States, you’re more likely to find yogurt made from cow’s (or, sometimes, goat’s) milk.
Greek-style yogurt is thicker and creamier than standard yogurt because most of its whey, the watery liquid found in yogurt, is strained out during production. Additionally, it’s tangier and has more than twice the fat of regular yogurt. It works well in applications where a velvety, substantial texture is desirable, such as Skordalia .
Labneh, or yogurt cheese, is the thickest form of strained yogurt. It’s often served as part of a meze spread and can be used plain, drizzled with olive oil, or flavored simply with herbs. 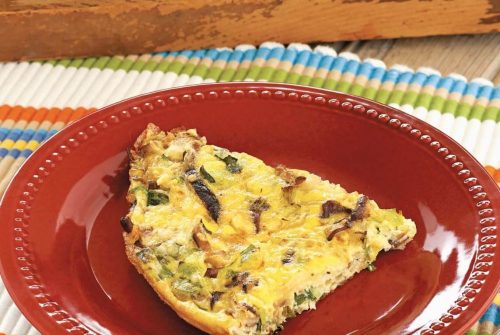 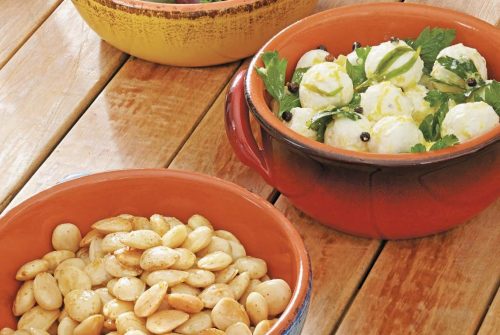