Meat and sweets are paired together in this chapter
to emphasize that they should be eaten sparingly, as
the Mediterranean Diet Pyramid suggests. These two
types of foods are worlds apart, culinarily speaking,
but their high-fat content makes them an indulgence,
not a daily ritual. To keep with a healthful lifestyle, the
types of meat dishes and sweets in this book are rather
healthful compared with what is available at cafés,
restaurants, and on store shelves.
To many, the word Mediterranean with the terms food
or cuisine calls to mind an image of lamb roasting on
a spit. For many people in other places, slow-roasted
lamb is symbolic of many countries in the region, and
different from the culinary traditions of their own
cultures. One reason lamb is so traditional, is because
it was eaten only on occasion, usually in the spring,
when Easter, Passover, a Muslim holiday, or a wedding
was celebrated. This tradition dates back to Bedouin
times when nomadic tribes had to travel with their
livestock. They refrained from killing them for meat
because it would cut off their milk supply that was
needed to make the yogurt and cheeses that people
relied on for daily sustenance. As a result, whenever
meat was served, it was to honor a guest. Newcomers
to the region were treated to as much meat as possi-
ble out of respect.
The fact that daily indulgence in meat is not the norm
is what has made the Mediterranean diet so success-
ful. Because meat is eaten infrequently, meat-based
recipes tend to be decadent, slow-cooked, and deli-
cious. Save these recipes for a special occasion or time
when you don’t have to hurry in the kitchen. While
none of them are complicated, they do take a little
more time than most weeknight recipes. The warm,
herbal, and spicy aromas wafting in the air alone will
prove that your patience has paid off.

Lamb, goat, veal, and beef are enjoyed throughout the
Mediterranean. In my years as a cooking instructor, I
was amazed to find out how many people had aver-
sions to lamb, goat, and veal—all for various reasons.
Yet, these meats offer great flavor and nutrition, as well
as blank culinary canvases to build upon.
Goats are known for their hardiness and ability to
adapt to difficult conditions. Domesticated in Syria
around 8,000 BCE, goats underwent an evolution that
significantly changed their morphology before goat
farming was introduced to Europe and then the rest
of the world. As the animals took to various terrains,
different types of breeds developed (there are currently
more than 300 varieties worldwide). Sheep and goats
were not raised specifically for their meat, as they are in
many places today. Instead, early nomadic cultures trav-
eled with the animals for their milk, which would be
transformed into yogurt and cheese; slaughtering one
to eat its meat was viewed as wasteful. Meat was usu-
ally only served in order to honor a guest visiting the
tribe, or for a holiday or wedding. Over the thousands
of years that have passed, the notion of meat being
special has become deeply interwoven into the culture
of the Middle Eastern portion of the Mediterranean.
The popularity of lamb meat in the Mediterranean
didn’t come by accident. In addition to its popularity in
antiquity, the monotheistic faiths also helped to make
it more widely appreciated. The symbolism of lamb in
the Judeo-Christian-Islamic faiths made it even more
popular—and since sheep give birth in the late winter,
it became the meat of choice for Passover, Easter, wed-
dings, and other spring holidays. Lamb meat is easy
to prepare, works well in a wide variety of culinary
applications, and is healthful.
Nutritional Benefits
There are many reasons to love goat. First of all, goat
meat is easily digestible by the body. It is also lean,
easy to prepare, and lends itself to a wide variety of
preparations and cuisines. Goats are also good for the
environment thanks to their eco-friendly grazing pat-
terns. While offering a significant amount of protein,
goat meat is the leanest of all meats (other than os-
trich), has the lowest amount of cholesterol, and offers
generous amounts of iron and other nutrients.
I grew up eating lamb as part of the Greek Easter
celebrations. According to the Tri-Lamb Group, on
average, a 3-ounce (85 g) serving of lamb is lean—
about 175 calories. Lean cuts include the leg, loin,
and rack. Lamb provides vitamins and minerals and
is an excellent source of protein, which helps keep
hunger at bay, preserves lean body mass, and regulates
blood sugar. A 3-ounce (85 g) serving has 23 grams of
protein—nearly half of the daily recommended needs.
The same serving size also offers a good dose of heart-
healthy monounsaturated fat and almost five times
the amount of omega-3 fatty acids as found in beef.
Both veal and beef have similar amounts of protein
(approximately 30 grams per 3 ounces (85 g) of meat).
Beef has slightly less fat, cholesterol, and calories than
veal, but both meats are good sources of B vitamins
that are needed for energy. They are also significant
sources of riboflavin, niacin, and pantothenic acid.
Both beef and veal contain approximately one-quarter
of the daily recommended value of zinc. Red meat,
in general, offers more B 12 , iron, and zinc than white
meat as well as a higher amount of healthful fatty
acids. Goat, sheep, and beef fat (as well as that of
other ruminants) contains about equal parts saturated
and monounsaturated fat with only a small quantity of
polyunsaturated fat.
The Mediterranean diet recommends eating less than
1 pound (455 g) of red meat per month—which
breaks down to approximately one 4-ounce (115 g)
serving per week. While the traditional eating patterns
in the Mediterranean region don’t prescribe eating
meat daily, when it is eaten, delicious, high-quality,
fresh meat is enjoyed. Eating meat sparingly seems
only to enhance its image as the ultimate demonstra-
tion of hospitality in the region. In most places it is
considered disrespectful to serve guests a vegetarian
meal. The lack of meat on the table means that you
are too poor to afford it, or that you do not think your
guest is worthy of receiving it. These recipes will show
any guest that he or she is indeed worth it.
I realize that many people might be alarmed at my
decision to combine meats and sweets in the same
chapter, but I can assure you it’s for good reason. 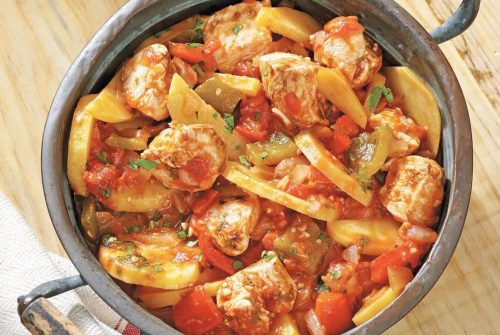 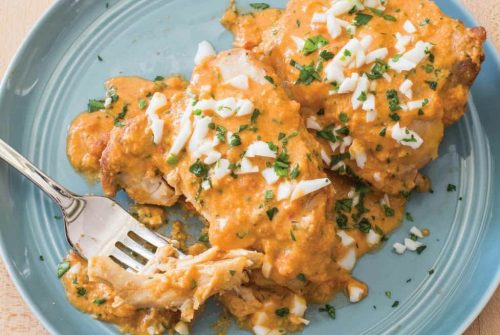 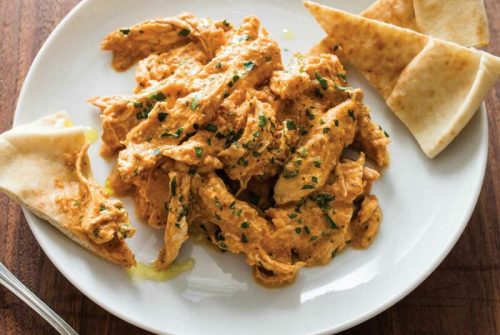 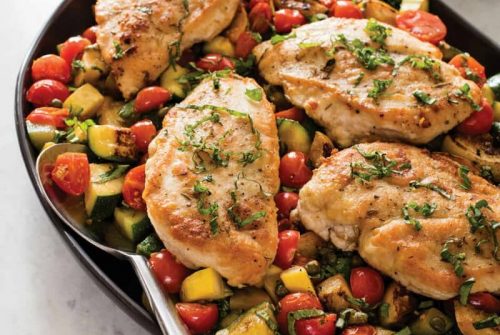